Internet Explorer 6. Nine years on, it’s still a headache for web designers and developers across the globe!

Most of us would like to forget about this horrid old browser — first launched in 2001, for crying out loud — but there’s always that client or user who insists on using it (or is forced to by their employer). Even among the audience of W3Schools — a web-savvy crowd if ever there was one — there are still around 5% of visitors using IE6 at the time of writing.

The result of all this is that we are forced to spend hours of extra coding time, just to make our sites work in this outdated browser.

How many big sites these days actually bother supporting IE6?

But how many big sites these days actually bother supporting IE6? One might think that they all would, considering their huge user bases. But is this the case?

For this article, I fired up Alexa’s Top 500 Global Sites list — this is a list of the most visited sites on the web, according to Alexa. I then worked my way through the top 30 sites in the list, testing them in IE6 running on a Windows 2000 Server SP4 virtual machine. I also tested them in Firefox 3.6.12 on the same VM, for comparison. Both browsers had the Flash plugin installed.

You’ll find a screenshot of each site as it looks in IE6 (and occasionally Firefox). Sometimes I’ve shown the whole page, sometimes just a problem area within the page. I’ve also included a brief description of any problems found.

Generally I tested just the homepage of each site. However, if there’s another page that better represents the experience of using the site then I’ve tested that page instead.

I’ve omitted several types of site from the list, for various reasons:

A couple more caveats: I’ve only tested each site briefly, so there may well be IE6 issues in a site if you dig deep enough (if you find any please let me know in the article comments!). Also, of course, sites change all the time, so you might find that a site’s IE6 compatibility has changed by the time you read this!

Although Google search works fine in IE6, with no layout issues, it does have reduced functionality. There are fewer options in the sidebar (see screenshot above), and Google’s new “Instant Search” option is unavailable. 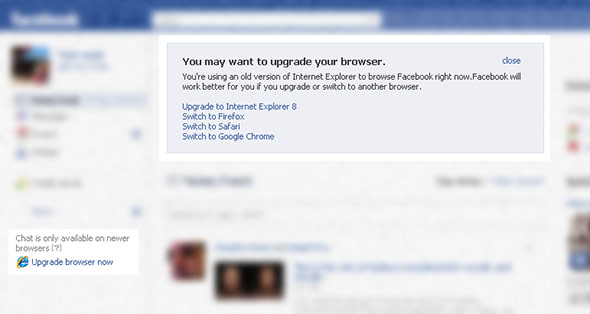 Facebook doesn’t officially support IE6 any more, and once you’ve logged in you get a message encouraging you to upgrade. Certain features such as chat don’t work either. That said, the site’s still pretty much usable in IE6, with no major layout issues. 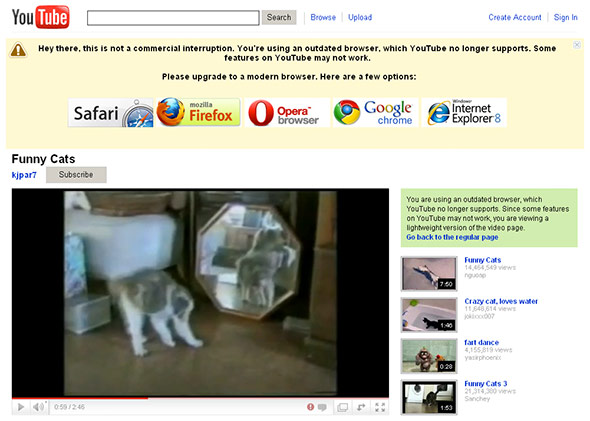 YouTube is a bit more insistent with its “upgrade your browser” messages. Again, though, the site seems to function pretty well in IE6. The main differences seem to be no Add to Favorites, Share or Embed buttons below the video, and everything looks a bit uglier. 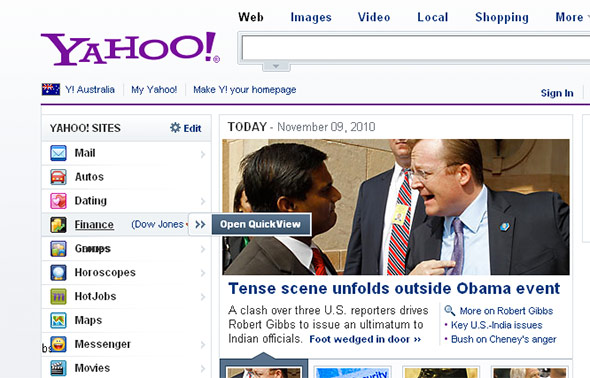 Yahoo! works pretty much flawlessly in IE6. The only slight issue I spotted on the homepage was the word “Groups” being garbled when hovering over the “Finance” link (see screenshot).

Wikipedia is generally flawless in IE6, with slightly reduced functionality: the expandable content areas in the sidebar and footer are permanently expanded, with no option to fold them up (see screenshots above).

IE6 also reports JavaScript errors, displaying a warning triangle in the status bar. (This is a very common occurrence which I noticed across many major sites.) 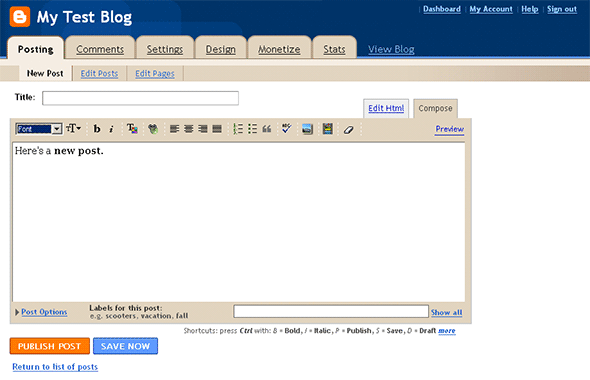 Blogger’s admin functions seem to work fine with IE6. The only issue I spotted was that their new post editor doesn’t work (you just get a blank screen), so you need to select the “Old editor” option under the Settings tab if you’re using IE6. 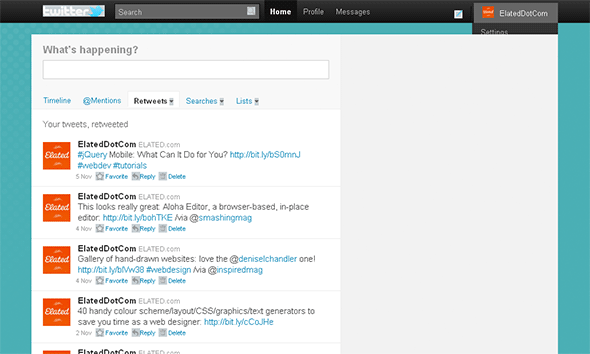 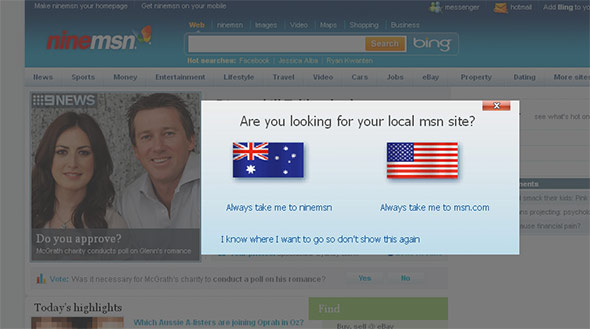 Oh the irony. Visiting msn.com in IE6 pops up an “Are you looking for your local msn site?” dialog, which is completely non-functional — clicking any of the links or icons in the dialog brings up JavaScript errors, and there’s no way to close the dialog and view the site. Maybe Microsoft don’t have a copy of IE6 to test with? 😉

Amazon works perfectly in IE6. Flyout menus, videos, music samples — everything. I guess Amazon can’t afford for it not to work…

WordPress.com is pretty broken in IE6, layout-wise. We’re talking rectangles around images; boxes all over the place; and missing text in the top bar. One assumes that the WordPress folks don’t care much about IE6…

As you’d hope, Microsoft’s site works pretty well in IE6, with no major layout or functionality issues found. The only thing I spotted was the grey box around the top-left Windows logo (see screenshot), but this only appears for a few seconds until their transparent PNG fix JavaScript kicks in.

LinkedIn’s site seems to work pretty well in IE6. There’s the odd issue like misaligned form fields (see screenshot), but otherwise good. (That said, I haven’t logged in to explore the site further.) 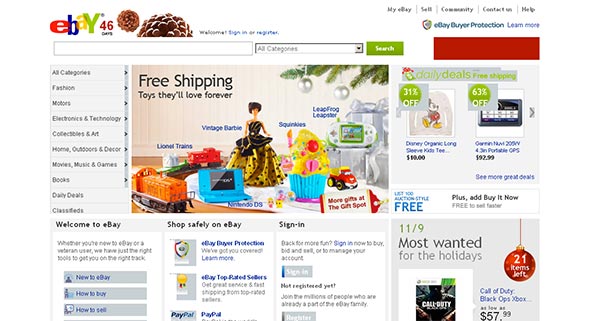 eBay has various CSS issues in IE6. The red bar that should go all the way across the top only goes from the right hand edge to just after the green Search button. There are transparent PNG issues all over the place (grey rectangles), and the background images on the Sign In/Register buttons aren’t repeating as they should. The site seems to basically work though.

Bing seems flawless in IE6. Even things like the video preview rollovers work. A vast improvement over MSN!

Apart from the odd very minor layout issue — and the inevitable JavaScript errors — Conduit’s site seems to work fine in IE6, with no noticeable functionality glitches. The homepage did seem to hit the CPU pretty hard though. 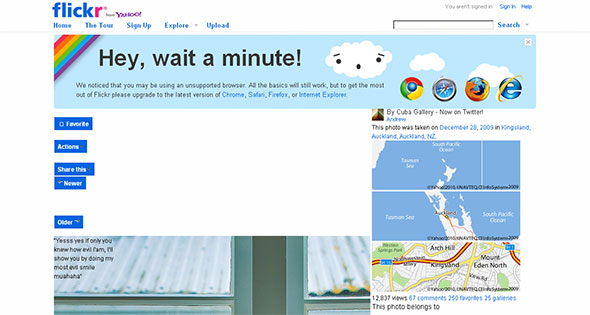 Flickr on IE6 is pretty much a no-go. Buttons are all over the place; rollovers explode into separate images; and random text overlaps the photos and other content. The site also wisely displays an “unsupported browser” banner along the top, advising you to upgrade. 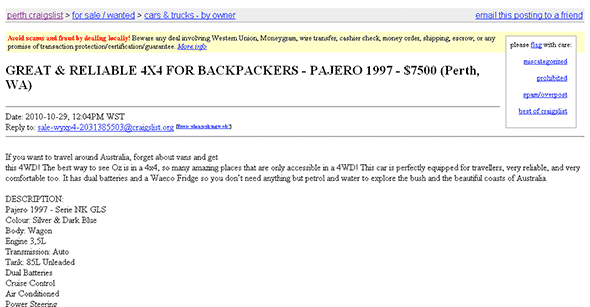 Craigslist works perfectly in IE6. But let’s face it, there’s not much to go wrong!

Go generally works very well in IE6, with only the odd minor layout issue, such as the misaligned top-right ad in the screenshot above.

Myspace in IE6 is a bit of a train wreck, with a messed-up main menu and transparent PNG issues. Then again, Myspace isn’t exactly beautiful in other browsers, is it? 😉 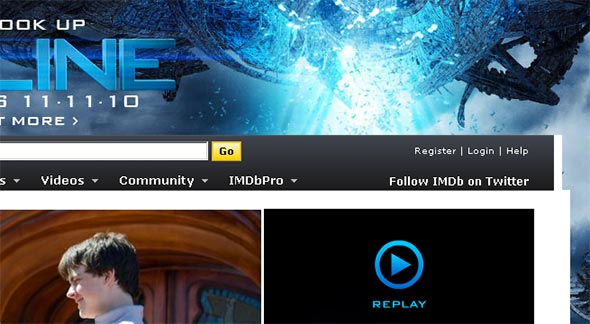 The IMDB is pretty good in IE6, with just the odd layout issue like the misaligned header in the screenshot above, and the odd transparent PNG rectangle. Movie listings and video trailers all work fine. 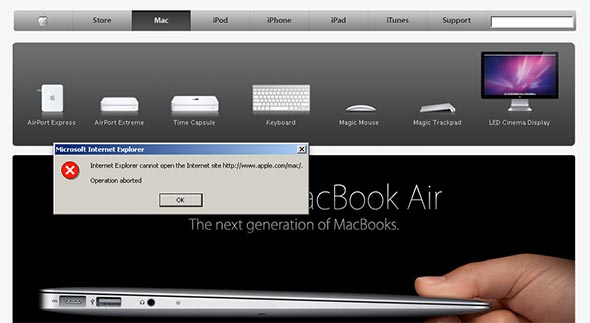 This is pretty funny. Try browsing the Mac page on the Apple site, and IE6 pops up a friendly dialog: “Internet Explorer cannot open the Internet site http://www.apple.com/mac/. Operation aborted”. In other words: “How dare you try to defect to a Mac?!”

To be fair, the rest of the site works nearly flawlessly in IE6. 🙂

IE6 is at it again! As well as trying to stop you buying a Mac, it tries to stop you downloading Firefox by refusing to display its logo. IE will rule forever!

The rest of the site seems to just about function, although the “Add-ons” section is pretty screwed. Then again, you’re unlikely to be browsing for Firefox add-ons using IE6… 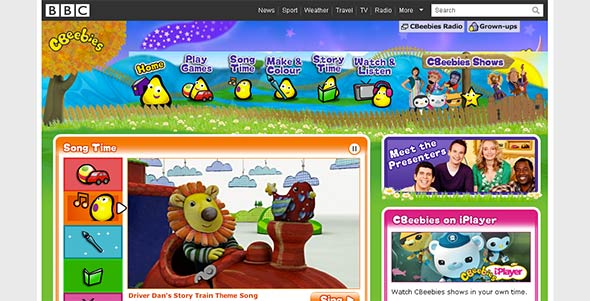 Very impressed with the BBC. I couldn’t find a single problem with IE6 on their main site or any of their sub-sites, including the design-heavy CBeebies site (see screenshot). Videos and Flash games all work perfectly.

Paypal’s pretty minimalistic site works fine in IE6. There’s the odd minor CSS issue, such as square borders around radio buttons, but no obvious functionality issues. Some pages feature a gentle warning to use a newer browser (see screenshot above) — this appears in all browsers, not just IE6. 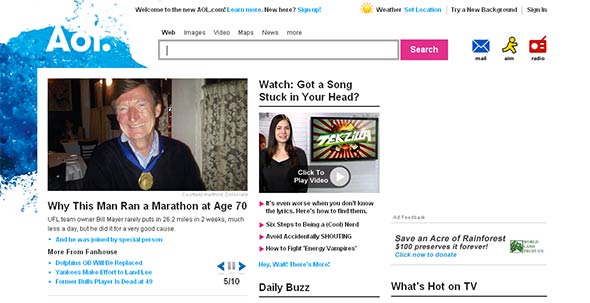 AOL’s very content-heavy homepage just about works OK in IE6, albeit with the odd missing ad and transparent PNG issue, as well as painful browser freezes/slowdowns. But check out the homepage in Firefox in the screenshot above. I’ve heard of ad-heavy sites but that’s just ridiculous. Oops!

Adobe’s done an impressive job with their site’s IE6 compatibility. It looks practically identical on IE6 and Firefox. The only differences I found were sharp drop shadows around boxes (they’re nicely blurred in other browsers), and no smooth opening/closing of the accordion items in the right hand sidebar. Otherwise, spot on. (This is partly down to the site’s heavy reliance on Flash, of course.)

Ask.com is nearly flawless in IE6. All the search functionality is there, and there are no layout issues. There are small differences like no rounded corners on some boxes, and the odd transparent PNG issue, but that’s about it.

While the ESPN sports site just about functions correctly, it has some fairly major layout issues such as central columns dropping down below the left and right columns (see screenshot above), as well as many transparent PNG issues and JavaScript errors. It’s obvious that IE6 is far from ESPN’s top priority! The site’s also very slow in IE6 — in fact, any content-heavy page really seems to hit IE6 hard.

CNN’s site works okay in IE6, with no layout issues to speak of. On the minus side, the site’s slow to load, videos are a bit jerky, and the Politics page reliably crashes the browser (see screenshot). Still, could be worse! 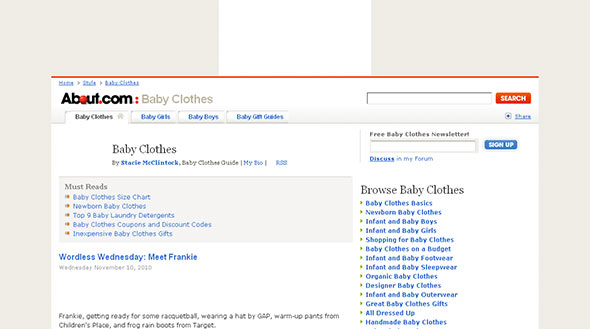 About has some oddities with IE6, including images randomly disappearing, a curious white rectangle at the top of the page where the ad should be, and the inevitable JavaScript errors. The basic functionality seems OK though.

The chart below shows the broad spectrum of IE6 support across the top 30 websites, from flawless down to catastrophic:

Two things surprised me about these results:

Personally as a web coder I find these stats cheering. If major sites such as Twitter, WordPress.com and ESPN don’t care about IE6 support, maybe the rest of us shouldn’t care so much either? 🙂

What do you think of these results? I’d love to hear your thoughts in the comments below!