The latest version of jQuery Mobile, 1.1, has just hit the streets, and it has some great new features and improvements over 1.0. In this article you’ll get a quick run-down of jQuery Mobile 1.1, and all that it has to offer you as a mobile web developer.

At the end of the article, you’ll also get a brief taste of the new features and widgets that are slated for the upcoming jQuery Mobile 1.2 release.

Fixed toolbars are header and footer bars that you lock to the top or bottom of the viewport by adding the data-position="fixed" attribute to the header or footer.

The easiest way to create fixed page elements is to use the CSS position: fixed property. Since mobile browser support for this property has historically been very patchy, older versions of jQuery Mobile dynamically repositioned the fixed toolbars as the user scrolled. This worked, but the effect was somewhat clunky.

Thankfully, browser support has improved these days, and with version 1.1, the jQuery Mobile team have totally reworked fixed toolbars so that they now use position: fixed when possible, resulting in much smoother fixed toolbars. For browsers that don’t support position: fixed, such as Safari in iOS 4.3, the framework falls back to regular statically-positioned toolbars, with the header at the top of the page and the footer at the bottom.

If you want to re-enable the previous dynamically-repositioned fixed toolbars for older browsers — as used by jQuery Mobile 1.0 and earlier — there’s a polyfill available. This can be useful if you use header and/or footer bars in very long pages.

Press the buttons below to compare the older, dynamically-positioned fixed toolbars with the new position: fixed toolbars. (To see the new toolbars working, you’ll need a modern mobile browser such as Safari in iOS 5, or a desktop browser.)

In addition, fixed toolbars now have a range of options and methods that you can use to customize their behaviour. These include the visibleOnPageShow option that controls whether the toolbar appears when the page is initially shown; the tapToggle option for turning the “toggle-on-tap” feature on or off; and the show, hide and toggle methods for programmatically displaying and hiding toolbars.

There are some known issues with position: fixed and Android 2.2/2.3. Check the docs for details.

jQuery Mobile 1.0 used the CSS overflow-scrolling: touch property to improve fixed toolbars in browsers that supported it. Since 1.1 now uses true position: fixed toolbars, the overflow-scrolling: touch code has been removed from the framework. This means that 1.0’s $.mobile.touchOverflowEnabled global option no longer has any effect in 1.1. The option is now deprecated, so you should remove any reference to it from your code.

This scrolling to the top of the page can be quite jarring, especially with slower mobile browsers:

In jQuery Mobile 1.0, the framework has to scroll to the top of the current page (centre image) before it can transition to the new page (right image).

Although it’s not currently possible to avoid the scrolling, with version 1.1 the jQuery Mobile team have come up with a great workaround. Now the process looks like this:

The clever bit is that jQuery Mobile now fades the current page out just before scrolling the page to the top, then fades it back in after the scroll. This has two advantages:

You can see the difference by viewing the following two pages in a modern mobile browser. For each page, scroll down, then tap the View Transition button to see a “flip” transition in action. Notice that the transitions are quicker and smoother in 1.1, and the scroll to the top of the page is much less noticeable, particularly with mobile browsers.

You can also check out some transition demos on the jQuery Mobile site:

The exception to this new fade in/out rule is the slide transition, which still uses the old, non-fading method, since it looks a lot better without the fade. If you want to apply a faster version of the slide transition that does incorporate the fade, use slidefade instead of slide.

Another nice improvement is that transitions are now supported in Firefox (newer versions only).

turn
Flips the current page towards you, bringing the new page in from behind, as if the left edges of the pages were attached to a pole. This is reminiscent of the flip effect in Windows 8’s Metro UI.
flow
Moves the current page into the background, then slides it along to reveal the new page, which then moves into the foreground. This is much like Safari on the iPhone’s effect when switching between tabs.

You can see these two transitions in action by pressing the following buttons:

The loading spinner graphic has been redesigned so that it’s subtler and easier on the eye. The spinner also has no text by default (previously the word “loading” appeared beneath the spinner).

In addition, you can now set various extra options on the spinner:

You alter these settings globally in the usual way from within a mobileinit event handler, like this:

Additionally, if you call $.mobile.showPageLoadingMsg() to display the loading message on demand, you can now pass up to three arguments to customize the message and spinner:

Here’s a demo page that shows how some of these loading message options look: 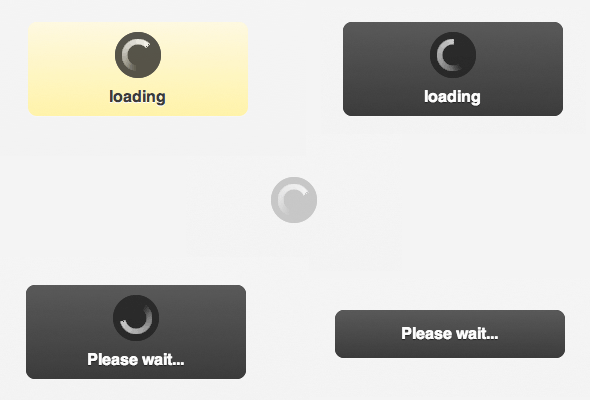 Mini form elements for use in toolbars

You can now add the attribute data-mini="true" to any form element to create a slightly smaller version of the element, perfect for placing in toolbars. If you like, you can also use these mini elements in your main page content areas to save space.

This page shows you all these mini form elements next to their full-size counterparts. 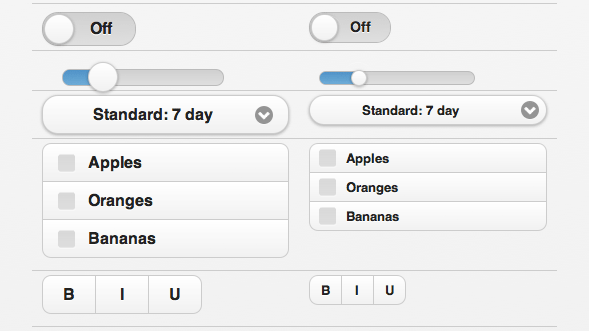 You can now add data-mini="true" to any form element (left) to render a miniature version of it (right).

The jQuery Mobile developers have restyled the flip toggle switch widget for 1.1. The new switch looks cleaner and more compact, and more closely mimics the flip switch style on many mobile platforms:

The flip toggle switch has had a makeover between jQuery Mobile 1.0 (left) and 1.1 (right).

Press the buttons below to see the old and new flip switches in action:

Range sliders now fully support the HTML step attribute. This attribute lets you specify the increment when moving the slider (it defaults to 1). For example, adding the attribute step="5" to an <input type="range"> element will make the slider move in steps of 5 when dragged, or when using the spinner control next to the slider (if available).

Previous versions of jQuery Mobile supported the step attribute only when using the keyboard or spinner control to move the slider. Now the step value also kicks in when dragging the slider and when using the numeric input box.

If the user enters a value in the numeric input box next to the slider, jQuery Mobile rounds the value to the nearest step value if necessary.

Another nice improvement to sliders is highlighting. By adding a data-highlight="true" attribute to a slider, you can highlight the area of the slider track to the left of the handle, giving the user a good visual indication of the value they’ve chosen:

Add data-highlight="true" to an <input type="range"> slider to add a highlight to the track.

Press the button below to check out these step and highlight improvements to sliders.

Preventing groups of elements from being enhanced

By default, jQuery Mobile goes through the markup in your mobile pages and enhances it to create touch-friendly widgets, such as sliders, checkboxes and list views. It also adds click handlers to links, and submit handlers to forms, to enable jQuery Mobile’s Ajax-based navigation system on these elements.

Usually this is what you want to happen. However, sometimes you might be creating your own custom widget, and you don’t want jQuery Mobile to apply its own enhancements to your widget markup.

With previous versions of jQuery Mobile, you could use various tricks such as the page plugin’s keepNative option, the initSelector property of individual plugins, and the data-role="none" attribute to disable enhancement for specific elements or element classes.

For this to work, you also need to set the global option $.mobile.ignoreContentEnabled to true inside a mobileinit event handler, like this:

Try this out by pressing the button below:

As mentioned above, jQuery Mobile automatically adds event handlers to links and forms to load target pages using its Ajax-based navigation system. Previous versions of jQuery Mobile let you disable Ajax handling for a specific link or form by adding the data-ajax="false" attribute to the a or form element.

In jQuery Mobile 1.1, you can now easily disable Ajax handling for all links and/or forms within a container element by adding data-ajax="false" to the container:

As with the data-enhance="false" attribute described in the previous section, you also need to set the global option $.mobile.ignoreContentEnabled to true inside a mobileinit event handler for data-ajax="false" to have any effect.

Try this out by pressing the button below. The demo page includes two containers, each with a link styled as a button. The first container’s link uses jQuery Mobile’s Ajax handling in the usual way. The second container has the data-ajax="false" attribute, so the link inside the container behaves as a standard, non-Ajax link:

There are some other minor improvements in jQuery Mobile 1.1: 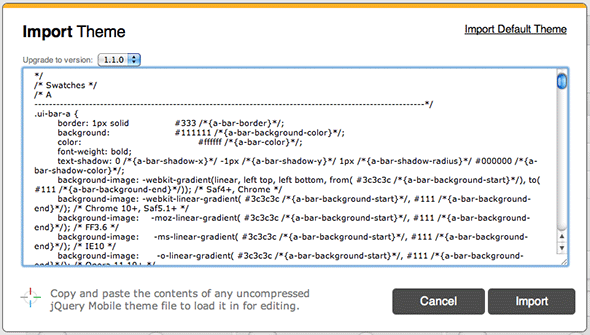 While 1.1 has been mainly about improving jQuery Mobile’s current functionality, 1.2 will see the introduction of some new widgets and features. Here are some highlight features that are currently planned:

In this article you explored many of the new features and improvements that jQuery Mobile 1.1 brings. You learned about: 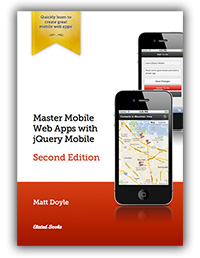 Want to get the most from jQuery Mobile? Check out my detailed book, Master Mobile Web Apps with jQuery Mobile. It contains all the info you need to start building great-looking mobile web apps with ease!

You can learn more about the book over on the Elated Store. Have fun!