Recently, a reader asked us how we created our floating orange “follow” tab that appears on the right-hand side of every page on elated.com. It’s quite a nice effect and it also uses some interesting new CSS3 features, so I thought it’d make a good topic for a tutorial!

In this tutorial you’ll learn how to:

Our first job is to create the image for the buttons within the tab. To do this, we’ll use a technique known as CSS sprites. The basic idea is that you create a single image containing all the buttons, in both their normal and their rollover states. Here’s the finished image that we need to make:

The finished sprite image, with normal and hover states for each of the 4 buttons

You then use the same image as the background for all the buttons, and position the image differently for each button (and rollover state) to reveal just the desired part of the image. It’s almost like sliding the frames of a movie through a movie projector.

My Making CSS Rollover Buttons tutorial uses a simpler version of this technique, creating a rollover effect for a single button.

Using a single sprite image like this gives you a few advantages over having separate images per button and normal/rollover state:

The disadvantages of sprites include:

On the whole, though, using sprites for things like buttons is a good idea, especially if you want the buttons to have a rollover effect.

OK, let’s create the above image! For the elated.com design, Simon (our lovely designer) had already provided me with a Photoshop file containing the tab and basic buttons (you will of course need to create your own design to match the look of your site): 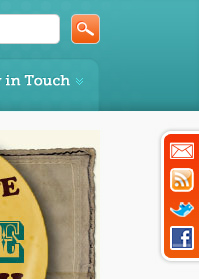 We’ll be creating the tab itself using pure CSS, so the only images we need to deal with are the buttons. Here are the steps to create the sprite image for the buttons:

When you’re finished, you should have a PSD with all of your buttons in both normal and hover states, all nicely aligned vertically and with no gaps: 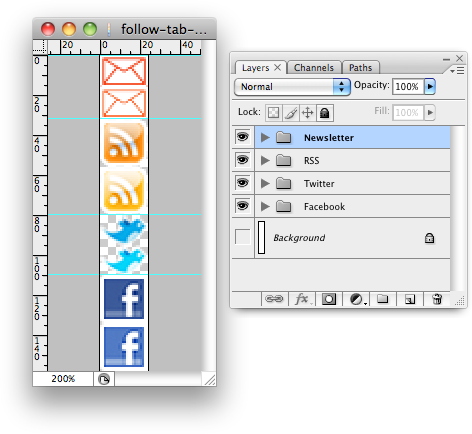 Save the file, and then use File > Save for Web & Devices to export the sprite as a PNG-24 image. Make sure the Transparency option is selected, since we want our buttons to sit on top of the gradient background. Call the file follow-tab-buttons.png and save it to an images folder on your hard drive.

You’ll find the finished PSD inside the images folder in the code download zip file. 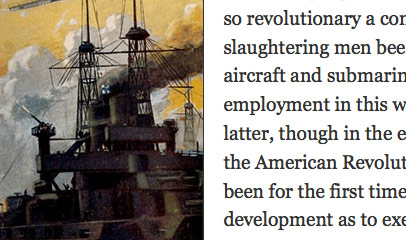 Our Photoshop work is done. Now we can start creating the tab in our webpage!

First we’ll create a dummy page to hold our tab. For this I’ve simply borrowed the HTML page I created in Smooth Fading Image Captions with Pure CSS3, and stripped out all the things that we don’t need for this tutorial. This page contains an excerpt from a public domain book, along with a few images. I’ve also included some CSS to style the page and the excerpt.

Save this page as index.html in the same place as your images folder you created earlier.

I’ve included the images from the page in the code download (click the button at the top of this article). Put these images in your images folder.

Step 3. Add the markup for the tab

Now that we’ve built our holding page, we can begin to add the tab itself.

As you can see, our tab is just an unordered list of links. We place each link’s text in a span element so that we can hide the text for CSS-enabled browsers (and display the button instead).

Place this markup into the page you created in Step 2. I placed it just before the "content" div, but in fact you can place it pretty much anywhere you like inside the body element, since it will be floated above the rest of the page content. 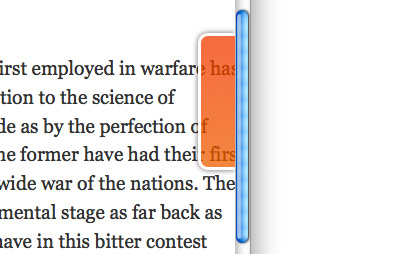 Now comes the fun bit! It’s time to style our #followTab ul element so that it looks like a tab.

Let’s work through each section of the above CSS:

With our tab styled, it’s time to move onto the buttons within the tabs. First we’ll apply some general styles both to the list items, and to the links (i.e. the buttons) inside the items:

As you can see, we’ve applied various margin and line-height values to each li element within the list, in order to space the elements out nicely across all browsers.

For the links/buttons, we’ve used display: block so that we can control the width and height of the links, and specified a uniform width of 24 pixels (the width of the buttons). We’ve also added our sprite image from Step 1 as the background image for each of the buttons.

Finally, we hide the span elements within the links so that the link text doesn’t display and mess up the buttons. We do this by setting position: absolute on the spans, then moving them way above the top of the browser window using top: -999em.

Step 6. Style each button within the tab

As well as applying the above generic styles for the buttons, we also need to style each button individually, since each button is different! Here’s the CSS:

For each button, we’ve specified the button’s height, and also adjusted the position of the background sprite image so that the appropriate button image appears for that button. For example, with the “RSS” button we’ve moved the background up 32 pixels, since that’s where the top of the RSS button image sits within the sprite.

In addition, we’ve given each button a rollover state with the :hover pseudo-class. Again, this involves sliding the background image up a number of pixels so that the appropriate rollover button image is displayed.

As you can see, it’s a bit of an effort working out the offsets for each button, but it doesn’t take too long. You can also use Photoshop to help you by adding guides to the PSD, as I’ve done in the example. You can then use the values in the Info palette to read the offsets.

Poor old IE6. It’s getting so long in the tooth now, and yet many people still have (want?) to use it! Its CSS support leaves a lot to be desired, and it doesn’t even support position: fixed, bless it.

Now, there are a few hacks around to emulate position: fixed in IE6. Personally I don’t care enough about IE6 to bother, so I was happy to have it just putting the tab in the right place in the page, but scrolling with the content. To do this, we just need to add a conditional comment for IE6, where we change #followTab from position: fixed to position: absolute:

It’s also worth pointing out that some features, such as the curved corners and drop shadow, won’t work in IE7/8 (since they don’t support them). I don’t currently have IE9 to test with, but they should work in IE9 (can anyone confirm?).

And we’re done! Again, here’s the finished demo of our floating, curvy, translucent tab with lovely gradient background and drop shadow. Try narrowing your browser window to see how the tab sits over the page content. And, of course, you’re probably looking at the live version on elated.com right now too! 🙂

I hope you enjoyed this tutorial. Let me know what you think in the comments below. Thanks!