Just as Adobe gears up to launch version 5 of their Creative Suite, they drop this little bombshell on us — Content-Aware Fill:

Watch the video above to see what Content-Aware Fill can do. Removing the bits of trash and the tree is impressive enough, but wait till you see the road being removed at 3:53, and the extra sky and clouds appearing at 4:44! To paraphrase Arthur C Clarke, this technology is so advanced it’s almost like magic.

Okay, you’ve gotten over the initial “wow” factor and managed to close your mouth again. How does this tool work exactly?

Content-Aware Fill is new Photoshop feature that resembles the Patch tool on steroids. It uses a very smart texture synthesis algorithm to sample image data from around the the area to patch, then reconstruct a texture based on the sampled data in order to patch the area.

Possibly. John Nack from Adobe cryptically talks about it appearing in a future version of Photoshop, which might mean CS5, or it might not. On the other hand, this video appears to demonstrate Content-Aware Fill – AKA “PatchMatch” — in an early version of CS5 (codename: “White Rabbit”):

I know one thing for certain though — if this is in CS5 I’ll be upgrading for sure. 🙂

Will it live up to the hype?

The demo video mainly shows Content-Aware Fill working on landscapes, which tend to have large depth of field and fairly predictable, uniform textures. It’ll be interesting to see if it can work equally well with scenes containing lots of contrast and detail, such as removing these urns from this shot of the Palace of Fine Arts in San Francisco: 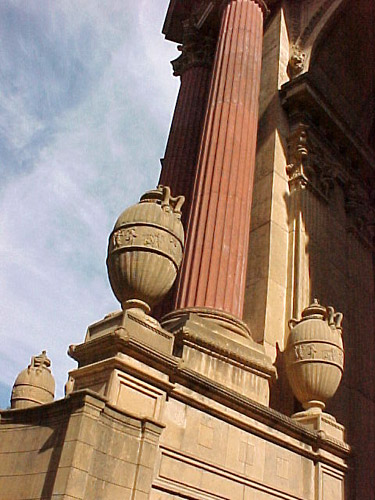 That said, even if Content-Aware Fill has its limits, it will still be a massive help when it comes to retouching photos.

What effect will this have on the design industry?

Some might say that this feature will take away a lot of the skill of Photoshopping. I disagree. It will end the tedious process of painstakingly removing unwanted objects from a photo, which frees the designer or photographer to concentrate more on the creative side of using Photoshop. This can only be a good thing in the long run.

On the negative side, Content-Aware Fill will make it much easier to remove watermarks from stock photo comps, which may have an impact on stock libraries’ sales figures. (Hopefully not.)

For me, the irony with Content-Aware Fill is that you’ll finally be able to use Photoshop to remove lens flares. 😉